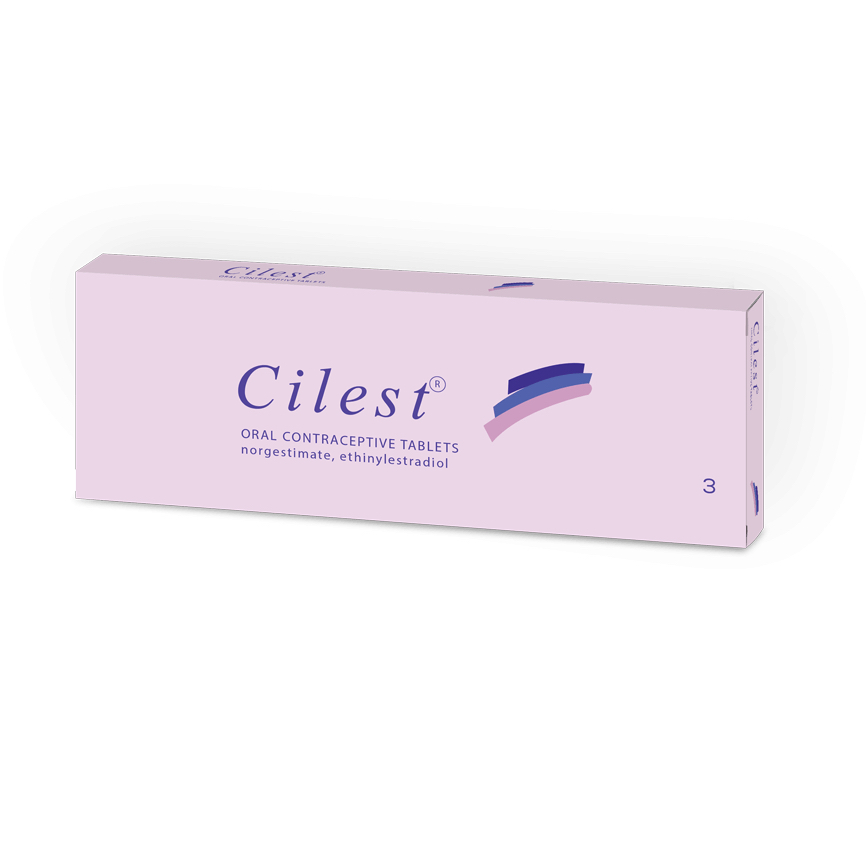 Used for the treatment of Contraceptives

Cilest is a contraceptive pill used to prevent pregnancy, that contains oestrogen and progestogen.

How does Cilest work?

Cilest contains two types of female sex hormones, oestrogen and progestogen. These hormones prevent an egg being released from your ovaries so you can’t get pregnant. Also, Cilest makes the fluid (mucus) in your cervix thicker which makes it more difficult for sperm to enter the womb.

What are the benefits of taking Cilest?

Using Cilest provides women with protection against unwanted pregnancies, allowing them more freedom with both their daily and sex lives. Because of the hormones it contains, Cilest can also help to regulate a woman’s menstrual cycle, or stop symptoms altogether for those who suffer badly.

When it comes to contraceptive pills, there are two different types; the combined pill and the progestogen-only pill (also known as POP). Cilest fits into the first category, which are popular among women as they are a reliable and reversible method of contraception, plus it doesn’t interrupt sex. Cilest can also make your periods regular, lighter and less painful

How do I use Cilest?

Cilest is a prescription-only medication. Always follow the advice of your doctor and read the patient information leaflet provided in the medication packet. Take the tablets orally by swallowing whole with some water.

When starting Cilest, you should take the first tablet up to and including day 5 of your next period to ensure you have protection from the first pill. You can also start your Cilest whenever you choose, but you should be aware that the protection won’t kick in until 7 days of taking it correctly (and therefore you will need to use extra contraception for this time, such as condoms).

If you wish to start taking Cilest but are already on a different pill, then you can start Cilest at any time (provided you are not pregnant). If you are using a non-hormonal method of contraception and your period started more than 5 days ago then you will need to use additional contraception until you have taken the first 7 pills correctly.

For women who have just had a baby and wish to start Cilest, you should consult your doctor as the risk of blood clots can be higher at this time. If you have had an abortion or miscarriage, your doctor can advise you about using Cilest.

The packets are clearly marked with days of the week and arrows to guide users on the direction of use. You select your first pill based on the day of the week that you begin (for example, if you start on a Wednesday then take the tablet on the first row marked ‘Wed’). Follow the direction of the arrows, taking one tablet a day until you finish the pack.

Cilest tablets come as 35/250 microgram film-coated tablets containing thinylestradiol and norgestimate respectively. Those using it should take one per day at approximately the same time for 21 days and then have a 7 day break, meaning that each pack equates to a 4 week supply.

Missing pills or starting a strip late may make your pill less effective. If you miss one pill then just take it when you remember and it won’t be a problem. If you miss more than one or start a pack more than one day late then it may mean you are not protected against pregnancy. If this happens, continue to take the pill as normal, taking the most recent missed pill and leaving any additional missed ones in the pack, but use extra contraception (such as condoms) for 7 days.

If you are sick or have very bad diarrhoea, your body may not get its usual dose of hormones from that pill. If you have been sick within 2 hours of taking Cilest, just take a pill from a spare strip. Carry on taking your pills as normal if you can and you shouldn’t need to use extra contraception.

If you want to delay having a period, finish the strip of pills you are taking. Start the next strip the next day without the usual 7 day break and then continue as normal.

Before taking Cilest, you should always first consult your doctor. You should not take Cilest if any of the following apply to you: