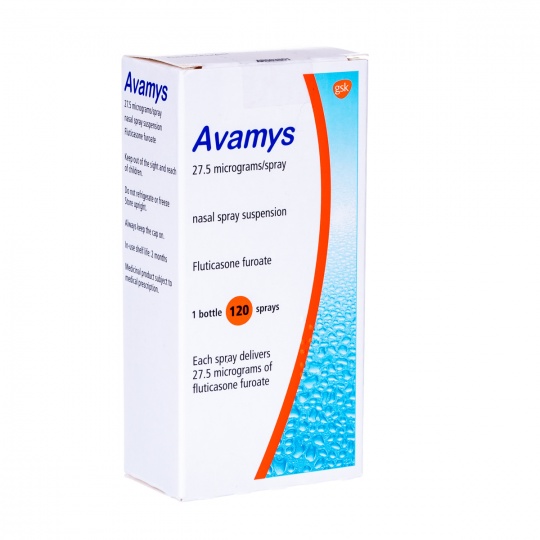 Fluticasone furoate, the active ingredient in Avamys nasal spray, is a corticosteroid. The medication may start providing relief to the symptoms of allergic rhinitis from 8 to 24 hours after the first dose. It may take several days before the full effect of the medication could be felt.

What are the benefits of Avamys?

Allergic rhinitis develops when the individual’s immune system becomes sensitized and overreacts to something in the environment that typically does not bother other people. Allergic rhinitis is commonly referred to as hay fever. It is a group of symptoms that affect the nose.

The common symptoms of allergic rhinitis include stuffy nose or congestions, itching in the nose, yes, mouth, or throat, sneezing, cough, and puffy or swollen eyelids. Allergic rhinitis is characterized by inflammation of the cells in the nasal mucosa, which accounts for most of the symptoms.

Using Avamys nasal spray will help contain the inflammation in the nasal mucosa and provide relief from the symptoms.

Avamys nasal spray is administered to provide effective relief of the symptoms of allergic rhinitis. It provides the following benefits such as:

How do I use Avamys?

The nasal spray must be prepared the first time it will be used or if the cap was left off for more than 3 days. Preparation will help ensure to get the full dose of the medicine.

Prepare the nasal spray by doing the following:

The dosage of Avamys nasal spray is as follows:

Like other medicines, Avamys can have some unwanted side effects. Not all individuals who use Avamys will experience the side effects. The side effects, if they occur, are most likely minor and temporary. However, there could be some serious side effects that need medical attention.

The most common side effects of Avamys are:

The uncommon side effects include pain, irritation, burning, soreness or dryness inside the nose.

Immediately inform your doctor if you notice any of the following symptoms of an allergic reaction:

The likelihood of Avamys passing into the breast milk after spraying Avamys into the nostrils is very small. But it is prudent to use Avamys with caution when the mother is breastfeeding. A breastfeeding mother should use Avamys only when the benefits outweigh the possible risks to the nursing infant. Ask your doctor for advice before using Avamys if you are breastfeeding.

Only a small amount of Avamys is absorbed into the bloodstream after application into the nose. The likelihood that it will significantly affect other medicines that you are taking is very small. However, it is a good idea that you share with your doctor a list of the other medications you are taking, especially those purchased without prescription, as well as herbal products. Your doctor will determine if a medication you are taking can interact with the effectiveness of Avamys nasal spray.