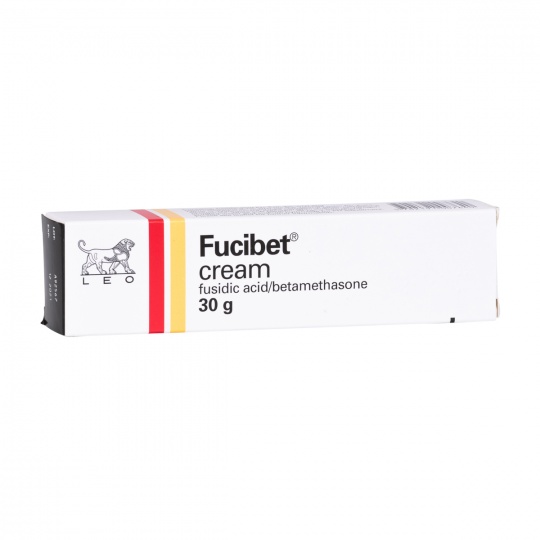 Used for the treatment of Eczema & Psoriasis

Fucibet cream is not used for the treatment of fungal infection.

How does Fucibet work?

Betamethasone is a topical corticosteroid that is used to reduce inflammation. Skin eczema is usually characterized by skin inflammation caused by the substances released by the immune system. The substances caused the blood vessels to widen, which results in the redness, swelling, pain, and itch in the affected areas.

When betamethasone is applied to the skin it works by acting inside the cells to decrease the release of the inflammatory substances, which results in reduced swelling, itch, and redness. Betamethasone is a strong corticosteroid.

What are the benefits of using Fucibet?

Fusidic acid is an antibiotic that treats bacterial infection. Bacterial infection usually occurs in eczema. The application of fusidic action in the affected area interferes with the bacteria’s production of protein, which is necessary for division and multiplication. Fusidic acid, while not directly killing the bacteria, causes them to be unable to divide and multiple. The bacteria will eventually die or be killed by the body’s immune system.

How do I use Fucibet?

Read and understand the leaflet enclosed with the product.

Apply Fucibet cream to the affected area of the skin, one or two times a day, using only a thin layer.

If the doctor directed you to use dressings with Fucibet, you should cleanse the skin thoroughly before you apply the cream under a fresh dressing.

Avoid getting Fucibet cream in the eyes, mouth, or nose. In case the cream accidentally gets in those areas, rinse it with cold water.

Thoroughly wash your hands after applying Fucibet cream, unless the skin of your hands is being treated.

This medicine contains an antimicrobial so it should not be used for longer than two weeks. Long-term use of the medicine may increase the chances of the microorganisms becoming resistant to the medicine. If the infection does not clear up with seven days, you should see your doctor because he might need to prescribe an oral antibiotic to clear up the infection.

Do not use Fucibet longer or more often than prescribed by your doctor.

Fucibet should not be diluted with moisturizer or any other cream. If you are using Fucibet and a moisturizer on the same area of the skin, you should leave at least 30 minutes between the applications of each product. This will allow the absorption of each product and avoid them mixing on the skin.

Fucibet cream should be applied topically as directed by your doctor.

The typical dose for adult is 250 mg twice daily, applied thinly on the affected area. When the symptoms show sign of improvements, the application of Fucibet cream should be less often, and continue to use an emollient cream to maintain the benefits in the longer term.

Medicines and their possible side effects can affect people in different ways. Everyone who will be using the cream may not experience the side effects of Fucibet.

The following are common side effects of this medicine:

Fucibet should not be used in the following:

Fucibet should not be used for children below six years of age.

Fucibet is not known to affect other medicines. However, it is still necessary that you tell your doctor all medicines you are using or planning to use while using Fucibet.