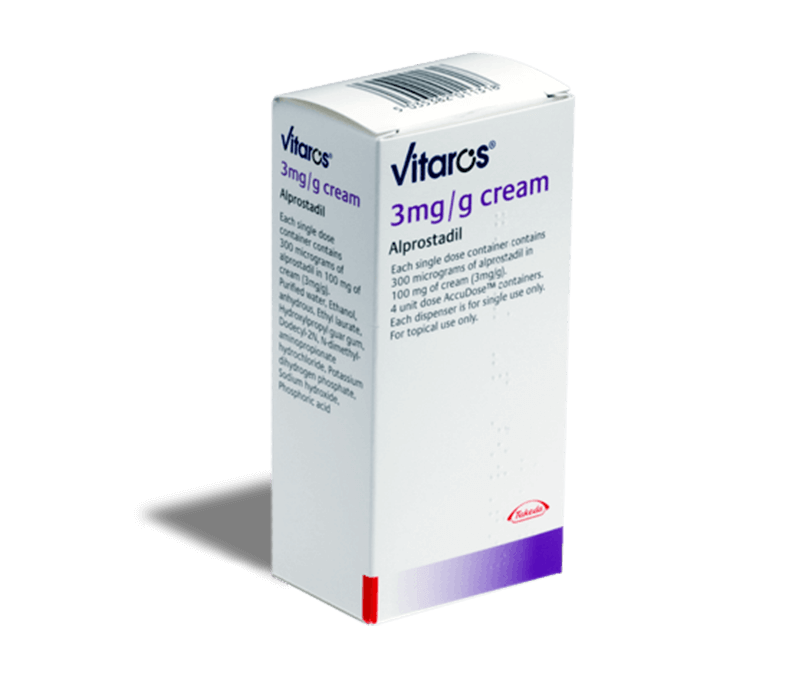 Vitaros is a cream for ED, manufactured by Ferring. It was previously marketed by Japanese company Takeda pharmaceuticals. It contains a substance called alprostadil, which can also be found in other products such as Caverject and MUSE. Vitaros is applied to the opening of the urethra at the tip of the penis, via a plunger. The effects of the treatment are noticeable within 5-30 minutes, and last for around 1-2 hours afterwards. Plungers are supplied (four in each pack) with the cream already contained within it, so you do not have to do anything to prepare it.

Many men might find erectile dysfunction a difficult subject to talk about, due to its private nature. Impotence is characterised by an ability to achieve and maintain an erection sufficient enough for sexual intercourse. Although most men will experience this at intermittent points in their lives, ED is said to be present if this situation occurs on a persistent basis. Left untreated, it can be a source of discord and distress for couples.

The condition is one which many people tend to associate with older men. And it is true that the condition affects 50 per cent of UK males aged between 40 and 70. However, a lot of younger men experience erectile dysfunction too. This might be due to a number of factors. Reduced blood flow, due to poor lifestyle or dietary habits can be one cause.

But a lot of men may encounter the problem when they enter into a new relationship, and are keen to impress their partner. The nerves and anxiety caused by this situation may put added pressure on a man to perform, and result in an inability to get an erection. Similarly, general stress, unrelated to the sexual situation itself, may also play a part. For instance, someone who is distracted due to pressure at work may find themselves experiencing problems in the bedroom.

Treatments such as Vitaros can change that. In erectile dysfunction, symptoms occur when the muscle walls around blood vessels at the base of the penis tighten and constrict; and this can make it harder for blood to get into the penis during moments of arousal. Blood flow to the penis is vital for erectile activity, and if this is restricted, an erection firm enough for penetration can be difficult to maintain.

How does Vitaros work?

Alprostadil is the active constituent in Vitaros cream. It is absorbed into the skin, and helps to dilate the vessels in the body which regulate the entry of blood into the penis. It also helps those vessels which let blood flow out of the penis to constrict, and this process keeps blood in the penis, and enables it to stay erect long enough for sexual intercourse.

One of the advantages of Vitaros over other ED medications is its cream formulation, meaning that in addition to its fast rate of action and ease of application, it is thought to be less likely to cause side effects, be affected by food and drink, or interact with other drugs. In particular, it is said to be suitable for patients taking nitrates, who may not be able to use oral forms of ED treatment.

Can I get Vitaros online?

Buying Vitaros from a trusted online pharmacy has never been more simple. It takes just a few minutes to fill in our medical questionnaire. Your answers will be promptly checked by one of our pharmacy prescribers. If approved, your medicine will be dispensed by our UK pharmacist and sent to your door by 24-hour courier.